Everyone likes anything Justice League related right? (Remembers Batman v Superman). Oh right… anyways. The Justice League cartoon is still considered a great cartoon series to this day. There has also been a long running series of animated movies based on DC Comics properties and storylines. This is one of them. Let’s talk about Justice League: War. 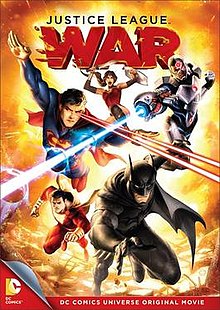 Justice League: War is an animated adaptation of the first storyline in the Justice League comics after the New 52 relaunch. The story boils down to the numerous heroes meeting for the first time and working together to stop an invasion from Darkseid. As in all adaptations, there are numerous differences in the dialogue and the scenes but the most important change is the swap of Aquaman for Shazam. It makes sense since they needed an inexperienced hero for the movie and this version of Shazam fits the bill which leads me into the actual characterization. Most of the characterization comes the original storyline and it works pretty well. Batman is Batman and Superman is Superman. No problems there. Two stumbles though: Green Lantern and Wonder Woman. Green Lantern follows the comics characterization by being completely unlikable and arrogant and.. ugh. It just doesn’t work in the long run and his shtick of being a hot head overstays its welcome. Honestly, Green Lantern is probably the worst character in this movie in terms of likability (similar to the comic storyline where he was the worst character in that storyline). Now Wonder Woman has a different problem that only shows up in a couple of scenes. This version of Wonder Woman goes back into the whole “inexperience ” of the modern world which leads into such comical shenanigans like eating sweets for the first time. Never liked this portrayal of Wonder Woman since it makes her look … well dumb. Thankfully, this only happens in the beginning of the movie and the rest of the movie involves Wonder Woman stabbing parademons with her sword. Speaking of fighting, let’s focus on the action scenes and animation. The action scenes are fantastic  with fluid animation and great sound effects (voice cast deserve a mention for being quite good too). While there are some of Man of Steel moments where the action becomes too boring, it happens inefrequently. If you haven’t noticed, I have barely talked about the story. Why? Simply there isn’t that much to talk about. Other than the focus on the origin of Cyborg, the film doesn’t showcase any other origins or backstory which to be fair is necessary or the movie would have been too long and bloated. In summary, the movie is good but not great. The characters are mostly likable and the humor is a bit of hit or miss. The action is intense with some fluid animation for support. The story is pretty typical and doesn’t try anything mind blowing new. If you are a DC or just a general comic book fan, give this movie a shot. Agree? Disagree? Miss Aquaman? Comment below and let me know.