Another game, another review. This time let’s talk about Gameloft’s entry into the sniping games arena. This is Sniper Fury. 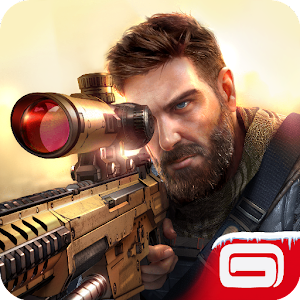 Sniper Fury is a action sniping (duh) game developed by Gameloft as their take of the sniping game genre popping up in mobile gaming.  You play as an unnamed sniper who gets drafted into a covert ops agency dedicating to fighting terrorists and the like. The story is bare bones as it can be but that’s not surprising since most sniping games have the same story (shoot bad guys) and its not the focus of the games. The game’s gameplay focuses on single player and multiplayer modes. The single player mode consists of story missions, sniper missions, assault missions and contracts. All of them gives you money(cash) and sometimes parts to upgrade your weapons. The story missions are the most fun since some of them gives you trials with exotic weapons which you can get with money(real money). The objectives are to shoot bad guys or identify a target…. and then shoot him. So the structure of the game’s single player mode is near identical to the other sniper games out there but what about multiplayer?

You have a base that generates gold(for crafting with parts) with some men stationed to defend it. You can attack other player’s bases in order to gain more gold but they can do the same to you. Its pretty simple but the time limit to attack a base is too small since the guards take a lot of shots which leads me to the main problem of this game. The pay wall in this game is huge. Once you finish chapter 1, progress slows down to a crawl with limited options other than to grind contracts(the only replay able mission type) over and over again  until you get enough cash to upgrade a weapon to do a mission only for the next mission require even more upgrades forcing the player to grind some more. It killed my enthusiasm with this game very quickly. I was stuck. I got bored grinding. Case closed. The question is if you can get some achievements along the way, which you can. They involve killing certain number people, completing story chapters and getting head shots among other things.  So the verdict? This game gets a new verdict called For Fans which pretty much says it all. Only fans of this genre or series might enjoy this game but others should skip it. Do you agree with me? Comment below and let me know. Snipe (ha see what I did there? No…. okay) you later.