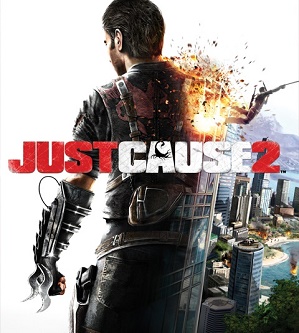 Just Cause 2 is (obviously) the sequel to Just Cause where you play as Rico who is an operative skilled at regime changes aka blowing stuff up.

This game focuses on dismantling the regime on the fictional nation of Panau in southeast Asia by causing chaos and working with numerous factions that are against the current regime. Now that is out of the way, let’s be honest. The story is just an excuse to blow stuff up and cause general mayhem. The developers knew that so they just decided to work on two things: content and gameplay. Gameplay wise is very similar to other open world action games. You have missions, side missions and collectibles to get or complete. The thing that makes Just Cause 2’s gameplay loads of fun is the grappling hook. The grappling hook(along with the parachute) lets you travel around the HUGE map of Just Cause 2 with relative ease  along with being used in combat against enemies and destroyable buildings. One example is grappling a statue with a vehicle and knocking said statue down using your momentum from the vehicle.

Oh yes, the physics of this game plays a huge role in the enjoyment of the gameplay. It’s fun to see gas tanks explode and radio antennas crumbling down. It’s a sight to behold. Now let’s talk about the content in more detail. There tow ways to generate chaos and money: completing missions and completing locations. The missions tend to be either pretty fun( hijacking an enemy vehicle) or not so fun( later story missions that require way too much trial and error to complete) so your mileage will vary on the missions. Now the locations are the real meat of the game. There are over 300 locations in the game map. I know that sounds like a lot(it is) but that’s what makes this game different than the other gta clones out there. The world truly is your sandbox with no need to a watch cut scene for hours on end as you go to location to location. Each location has its own completion percentage that raises by either locating boxes with parts for your health, vehicles and weapons or by destroying government property which ranges from gas stations to missile launchers. Doing this will increase chaos and gain you money used for weapons and vehicles in the black market. Rinse and repeat until you lost 5 hours or more at a time playing this game. Now comes the double edged sword part of the game: the achievements.

PREPARE!!! Prepare for investing ridiculous amounts of time into this game if you are going achievement hunting. Some of the achievements requires you to spend hours in order to reach a certain completion score  in the game (I got to 25%) to 100% a 100 locations in the map. Add in the misc. achievements and the missions(story and faction) and you got yourself a time killer of over 50 hours of content so ….. PREPARE!!!

So in summary? Just Cause 2 is a incredibly huge sandbox game to play in with immense potential just don’t expect the story to be good or the achievements to come easy and you are good to go. So this game gets a Play It verdict. Do you guys agree? Does the lack of a good story turn you off from the game? Comment below and let me know.