Alrighty then, the first post on this blog and it will be about one of my favorite games filled with blood, violence and a wicked sense of humor. What is surprising about this game is that it is actually a sequel that improves the formula of fun that the original set. The game is Borderlands 2. Welcome to Pandora!!!! 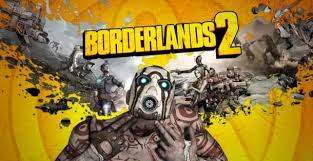 Borderlands 2 is the sequel to Borderlands; a first person shooter game made by Gearbox Software. This game stars a new cast of playable characters in the same old planet Pandora. This time there is an villain called Handsome Jack who is trying to open a vault containing vast amounts of energy and its up to you to stop him. As you may have already noticed, there is already an improvement from the original Borderlands  in the sense of having a strong story and villain. Borderlands didn’t really have that. There wasn’t much of a story and the main villain was(and still is) unmemorable. The story devolved into a go to point B and kill something while not caring who sent you and who you are killing. This game changes that by adding Handsome Jack who become one of the most memorable villains in recent history. He is a walking collection of villain traits including(but not limited to): cowardly, violent, egomaniac, sociopath, psychopath, etc. He truly is the epitome of a villain you will love to hate. It seems like I am focusing too much on Handsome Jack but the story revolves around him and people associated with him. He give reason to drive forward in terms of story. The supporting characters are also helped by Handsome Jack’s introduction making them have more of personality than just simple mission givers. That was Borderlands greatest weakness so what happened to its strengths?

Borderlands greatest strength was always the game play. A unique experience combining fps with Diablo style rpg. In summary, kill things to level up and get loot so you can kill stronger thing so you can get better loot and repeat. Your chosen character has a select class that cam be improved using skill points gained through level ups. so you can customize your character to fit your play style(there is a respec option that resets your characters skill but keep the points). The great thing about Borderlands 2 is that the game play hasn’t changed that much form the original game. Why fix what is not broken? There is one new element added to the game play that improves it. Badasss tokens. These tokens are earned through beating challenges which consist of killing, looting and exploring. Once you earned tokens, you can cash them in for a new attribute boost chosen out a random selection of five. Since the challenges involve doing what is fun in Pandora, there is not really a problem to kill 5 more bandits to gain a boost making this game even more addictive. So in short, this game is hells of fun with its characters and game play but what about its achievements? Second part time!!!!

The achievements in this game are(for the most part) pretty easy and part of the story. There is story based achievements for beating certain story missions and for exploring all of the game’s regions. There is a couple for doing side missions and leveling up. Unfortunately there are some that involve raid boss- endgame armageddon achievements  so expect to invest major time if you want to 100% percent this game. Honestly this game is a lot of fun and I truly believe every game should try it. Yes, even fps haters because it plays like nothing else out there. So I give this a Play It!!! verdict. So go out to Pandora and kill stuff for cripesakes.